Japanese-American drummer Akira Tana returned to Setsunan University this November, but on this occasion without his fellow Otonowa jazzmen. He spoke about the many connections between music and language, both as products in and of themselves and as processes.

Born in the US to Japanese parents, Mr. Tana grew up in a music-friendly environment. His mother played koto, and enrolled him in piano and trumpet lessons. However, he preferred to hit things, and his mother eventually rented him a snare drum. It was the beginning of a lifelong commitment, and he went on to play professionally as early as junior high school and later to study drumming and percussion at music school. Mr. Tana stressed the connections between practice and proficiency in both music and language, as well as taking advantage of communication opportunities as they arise with the abilities you have.

After his opening remarks, Mr. Tana fielded questions from two student moderators as well as the audience (Miss Iwasaki & Mr. Park) and gave thoughtful and sometimes surprising answers in response. Although too numerous to list in full here, the interview could be summarized as recognizing your calling in life and embracing it fully. In terms of music and language, a person does not have to be a professional musician to make music and connect with people, just as he does not have to be a linguist to talk with someone in a second language. The point is to use the resources available and make it work. According to Mr. Tana, it is our connections with people that will provide us with the most fulfillment, so our goals should be so oriented.

A big thank you to the interviewers and Mr. Tana for the thought-provoking session. We hope to see you again!

Article in Japanese with other photos 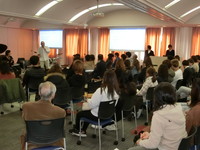 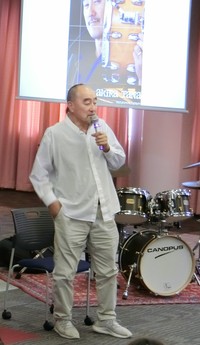